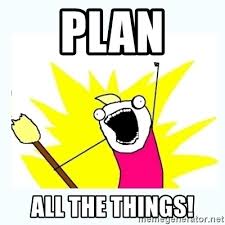 Hi, my name is Cait, and I’m a planner addict. No, seriously, you name a planner, I have probably tried it. I’ve done Franklin Covey, Commit30, PassionPlanner, DayTimer, At-a-Glance, Filofax, and even various Kickstarters. That’s just scratching the surface, because I have an itch to be organized.

That didn’t come out…quite…right, but you know what I mean. Can I get a show of hands if any of these have ever applied to you?

We all know how this turns out, don’t we? Like new office supplies, a new lipstick, and New Year’s resolutions, planners promise help and hope for the future…only to end up in the great landfill of disappointment.

Why are we planner addicts? Why do planners fail? Is there any way to make a planner truly work?

Before the smartphone, before the “like” button became our personal little dopamine hit, there was THE CHECKBOX.

Oh, yeah. We all know what I’m talking about. That rare day that occurred about as frequently as the Super Blood Harvest Blue Moon (or whatever) when we managed to check every single thing off our to-do list.

I’ve had an approximate grand total of 12 days like that in my life.

Some of the problem stems from the fact my ADD interferes with my ability to prioritize and accurately estimate time-per-task. Other factors that I think probably contributed are seeing people around me at school and work who appeared to be flawlessly, ruthlessly, and brilliantly productive…often without the aid of any kind of planner or list. *TWITCH*

But, leaving aside genetic aberrations that allow certain people (I’m looking at you, Mom!) to hold entire cascading workflows in their heads, the question remains: WHY do we get so hung up on planners? Is it ambition? Addiction?

My guess it has to do with our culture of control.

From Manifest Destiny to Martha Stewart, American culture has always leaned hard into self-actualization, self-reliance, and self-confidence. There’s a fundamental belief that if we work hard enough, long enough, smart enough, we can CONTROL and CHANGE all things.

To be fair, and to a fair degree, we can.

But, we are also quicker to run head-first into the brick wall of NOPE and then keep bashing our foreheads against it. Because if we just hit our heads hard enough and long enough against the brick wall, it will crumble. And, it may happen, but we’ll probably be too dead to enjoy our victory.

But that checkbox will be CHECKED OFF!

The Best Laid Out Planners of Mice and Men

This would be a good moment to insert a nice little gallic shrug and eye roll. We could add in a dismissive flutter of fingers or moue for good measure. I’m not saying that the French don’t have their own issues with planners and organization. I mean, we’re talking about a country that has more than 1,600 types of cheese. You need to be on point to keep that delicious database straight.

Yet, there is a kind of gentle fatalism that they embrace that recognizes some things just won’t get done today…or ever. That fundamental acceptance of some degree of incompleteness is a magical thing. It leaves room for spontaneity, real prioritization, and time to sample some of those 1,600 cheeses.

I have never – NEVER – seen a planner that has a little section for each day (or week) for tasks that fall under, “Yeah, it would be great if you actually got these done, but the Earth won’t stop spinning if you don’t.”

Planners make room in their graphic layout for everything from water consumption to gratitude. But I have yet to see a planner that allows for wiggle room or accommodates failure. To give over valuable real estate from accomplishment to okay-if-you-can-but-if-you-can’t-meh seems like something that would cause the brains of planner design executives to explode.

By denying the possibility and probability of failure, planners set us up for failure while hitting our addictive dopamine centers with the idea of perfect productivity. This perpetuates the cycle of hope/failure/hope/failure/hope…you get it.

This isn’t to say that we as individuals don’t bear a good deal of responsibility in how we use our planners. After all, planners are just a device. Planners don’t cause failure. People with planners cause failure. Right? *crickets*

My point is that it frankly doesn’t matter how a planner is designed. Sure, some formats click better with how we parse out time and tasks. But, the crux of the matter is how WE parse out accomplishment, activity, and administration. And failure. Because don’t forget failure.

Are you getting twitchy yet? I’m getting so damn twitchy. My skin is CRAWLING even thinking about failure. Lack of achievement. A pristine page turned into a graveyard of empty checkboxes.

Yet, at the risk of sounding painfully obvious, we can’t have success without failure. I know, I know. You can’t have life without death, light without dark, chocolate without calories, yadda yadda yadda. But…

We are pathologically averse to accepting that we can’t have opportunity without cost, achievement without slacking, success without failure.

I know, the empty checkbox isn’t exactly failure on par with a stroke, at least at first glance. But, like arterial plaque, empty checkboxes build up walls of residual resentment and disappointment. Adverse effects may include distraction, depression, and tremendous delirium about a new planner’s potential to make our dreams come true.

When was the last time we actually felt good about acknowledging that the last three things on our to-do list just weren’t going to get done that day? Name the last time you gave yourself the grace of even the smallest leeway of understanding about your limits?

Maybe instead of gratitude or water consumption, we need need planners to have a space for, “It’s okay if this doesn’t get done.” Or, maybe, “Things that I failed to do today, but it’s alright.”

Maybe that kind of space might help us see more clearly all the things we actually do accomplish.

Planning to Fail at Planning

Planners fail. But, we fail to plan for planners failing because we fail.

No, that’s not a quantum distortion on your screen. And if you feel like you have failed to understand what I just said, then you have succeeded. *evil cackle* What? I’m Slytherin.

In all seriousness, I’m not trying to mess with you. (Okay, I am. Just a little. Girl needs some entertainment in her life.) I also don’t have all the answers. I don’t even have a quarter of the answers.

But…I have a lot of questions and a lot of experience at failure.

As a planner addict and certified failure expert, I can definitely say that there is no easy answer except to accept that not getting stuff done is an inexorable, inextricable part of planning to get stuff done. Accepting this is not a form of participation-trophy-overly-lenient-self-indulgent syndrome. It’s not about being pessimistic. It’s about being realistic.

The sort of success that can truly make a difference.

A Shot Across the Bow of the Good Ship HMS Planner

This blog post hasn’t said even a fraction of all the things I want to say about planners. Frankly, I could rabbit hole every single sentence in a psychosocioeconomic examination of our existential crisis of control.

In some ways, the hardest thing about this post was not doing that…because it felt like failure. It felt like leaving the argument only half-finished. It feels like I could have done better, more, smarter, faster.

Yet, perhaps, that’s why this post needs to end here. I need to force myself to say, “This is plenty for a post. There is tomorrow and another post I can write. There is the potential of compiling this all someday into a book (which probably would be the correct format to examine in depth every aspect I want to dig into).”

So, for now, I will say this: Planners, you have been put on notice. Culture of control? I’m coming for you. Self-indulgent leniency, don’t count on your participation trophy to save you.

I’m going to take it all on, and I am going to win…for the most part.

Want to read more angsty anxiousness about planner obsession? Check out this Caitlin’s article about the perils of a plethora of planners.

1 thought on “Confessions of a Planner Junkie: Why Planners Fail”