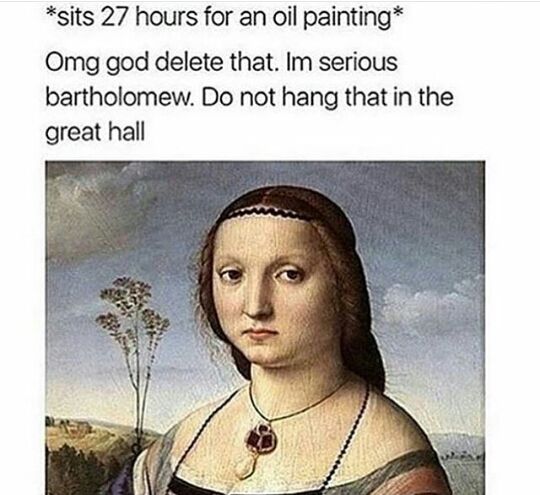 If you know me at all, you know I get a bit twitchy when it comes to what I like to call ‘faux medieval fantasy.’

There are stone castles and towers, flowing gowns, crowns, kings, warriors, sorcerers, the systematic oppression of women into traditional gender roles, etc. You know, the usual. 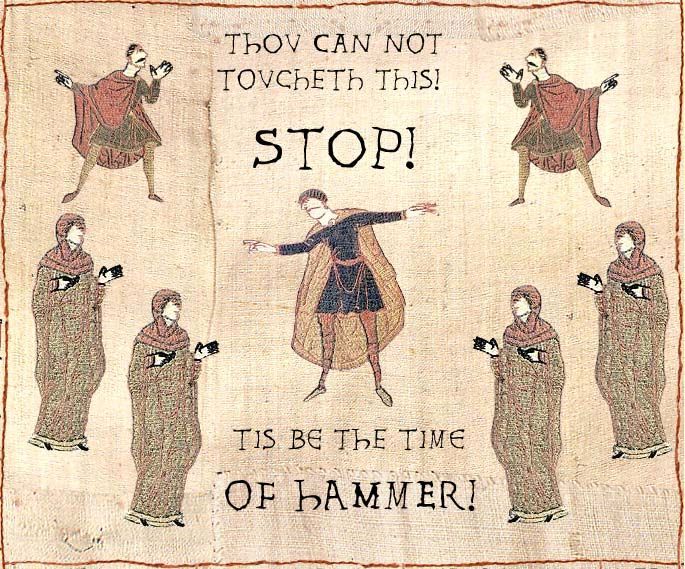 I think one of the reasons writers pick this model is because instinctively, it feels like it should be easy. I mean, from Errol Flynn to Flynn Ryder, we’re constantly exposed to effortless interpretations of medieval culture.

The thing is, to build a faux medieval fantasy world that is compelling, unique, immersive, and most importantly MEMORABLE, we as writers need to stop taking the EASY way and start taking the RIGHT way.

Walk with me through a hypothetical situation here.

We’re writing a scene where Seraphina, a thief-princess-in-disguise *twitch*, is tending Sir Taylor’s sword wound. For our purposes, the scene requires some description of the healing process. 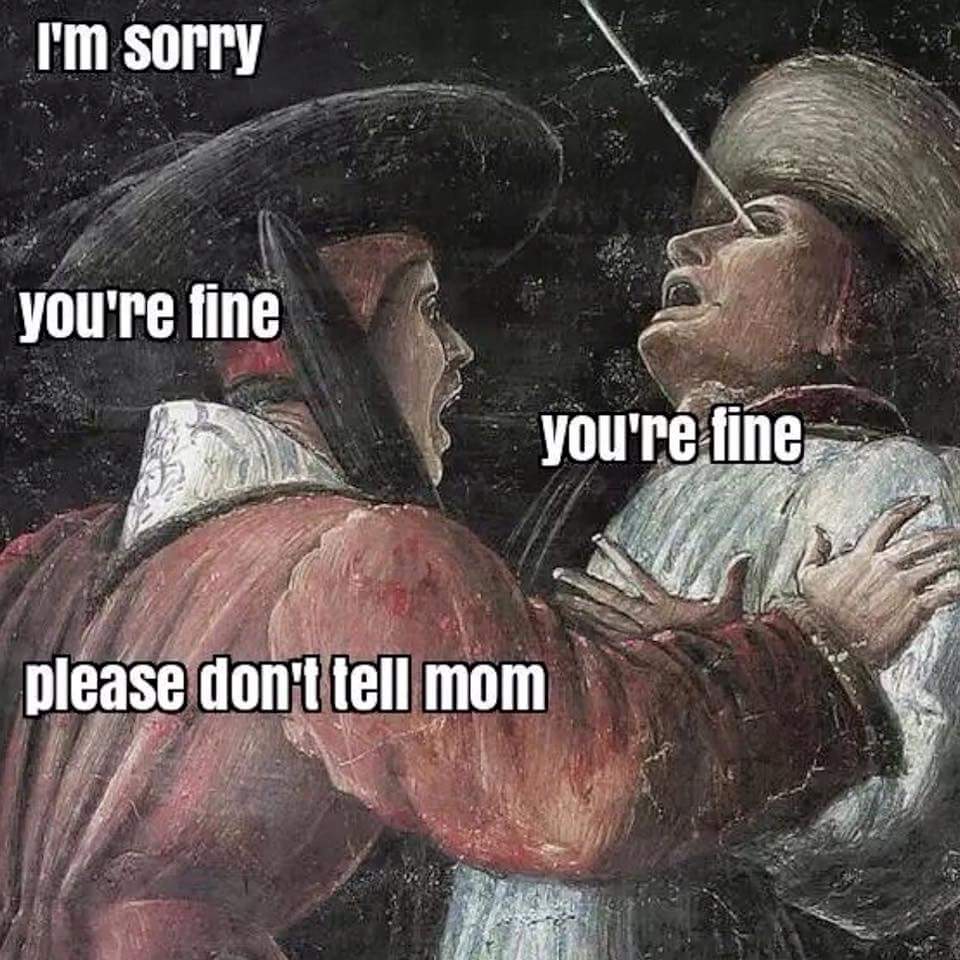 The EASY way to handle it is to fall back on a spurious mix of the BBC’s Robin Hood, Harry Potter, and maybe the Tudors if we’re feeling highbrow. The description would go something like this:

Seraphina took some willow bark from her pouch of herbs and dropped it into boiling water to make a pain-relieving tea for Sir Taylor. She fetched clean bandages and wrapped up his wound as best she could.

First of all, why is it ALWAYS willow bark? It’s like that’s the one fact about old apothecary practices that writers have picked up, and they toss it into their manuscripts so often, it’s practically a  ye olde opioid epidemic. 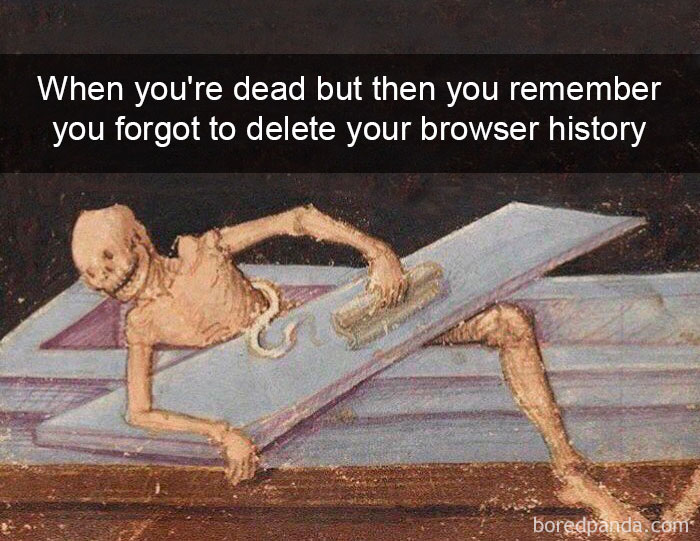 Fifteen minutes of skimming later, I haven’t miraculously become an expert in medieval medicine, but I’ve gleaned some good details that will make my descriptions more vivid.

I know that dressing a wound might involve grease, honey, stuffing it with absorbent dressing, turpentine (I know, right?), and clay. Hot oil was often used to cauterize wounds, especially in cases of amputation. There were many herbs and plants used as painkillers, not just willow bark. Also, remedies available were highly dependent on geography and economic resources.

So, if I were to rewrite Seraphina’s loving care of Sir Taylor the RIGHT way, it would go something like this:

Seraphina carefully packed the tufts of wool into Sir Taylor’s wound and smeared honey around the edges, all the while praying the surgeon would arrive soon to stitch him up. She then held to his lips a cup of wine to which she added a few precious drops of pain-killing extracts of poppyseed and belladonna.

Okay, I know we’re all cringing a bit at this point, but we can now visualize tastes, textures, movements more clearly. Our reader brains have glommed onto these details as a subconscious affirmation that this world is believable, and we settle even deeper into the story.

Technically, no. But, we can’t pretend to be surprised when our books don’t get long-term market traction.

There are several reasons why skating by with a working knowledge of The Princess Bride just won’t work in the long run.

The most fundamental rule of fantasy is that….there are rules. Magic must have limits. Kingdoms must have borders. Dragons must have soft underbellies.

Without rules and limits, there is nothing for the characters to struggle against, no odds to win over, no room to grow or become wiser. 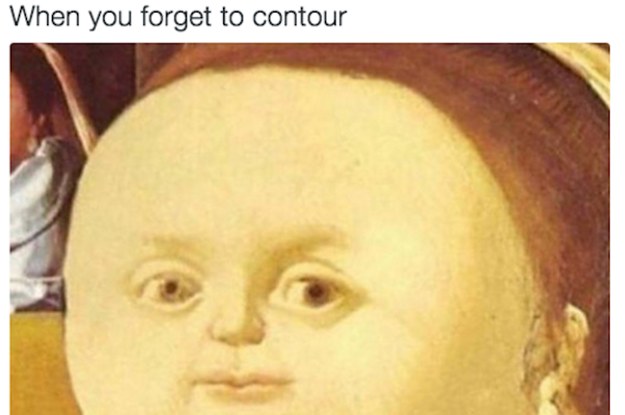 How does this apply to the application of wool, honey (and possibly turpentine) to Sir Taylor’s wound by Seraphina? It’s nuanced, but work with me here.

We can change out the pain relieving herbs (if absolutely necessary – see my next fundamental rule of fantasy), and we can add magic to the healing (if it fits with our world-building). BUT, in addition to creating limits to healing magic, we also need to know the limits of whatever medicine and medical techniques our characters are using.

Why do we have to be so specific about the medicine and medical techniques? Because that is the craft: adding details to descriptions that turn the illustrative into the evocative.

Maybe it’s not medicine. Maybe it’s the fletching on an arrow, or the design of liveries for footmen and pages. It could be how long it takes to bake bread, or what kind of cheese travels best for weeks-on-end without refrigeration through varying climactic conditions. (Because it seems like no self-respecting fantasy ever has anyone traveling without bread and cheese.)

Skip these details, and the result are bland, cookie-cutter, forgettable settings with characters who subconsciously annoy us with their anachronistic behavior. 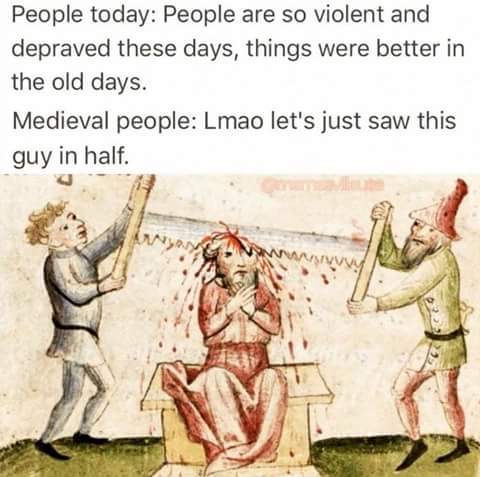 I’m not saying we have to become professorial-level scholars. However, I am saying that to write good faux medieval fantasy, we should become excellent lay scholars.

I probably won’t ever need to look up general wound care for the 13th century again. I might need to research sleep remedies, amputations, and fever treatments, but again, once I learn about those, I’ve got that knowledge, and it’s one less interruption to the writing flow.

just because we can fantasy! doesn’t mean we should Fantasy!

The next fundamental rule of fantasy (whoa, way to bring us back to the point, right?) is that we only change and create that which is absolutely relevant.

There is no need to create a whole other word for apple if apples have nothing to do with the plot or the climate/geography/world-building…especially if we are working in a faux medieval fantasy setting. 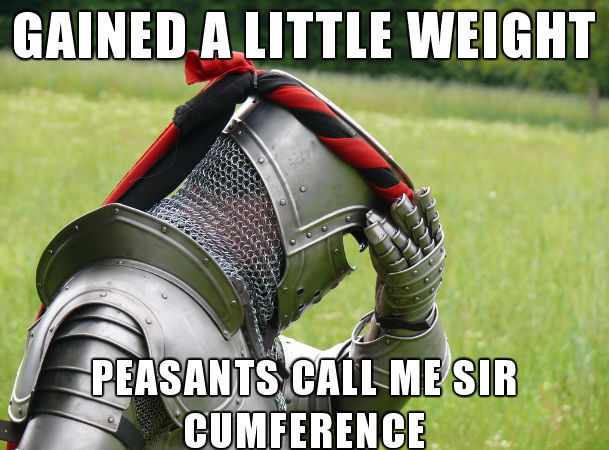 If we were on an alien world, then maybe there might be a reason. But if we are looking to add dragons and magic to a faux medieval northern European setting, then apples can stay apples.

Just to prove I’m not a total raving bitch when it comes to world-building and history (oh, who am I kidding? I totally am a raving, twitchy bitch about this stuff), let’s look at a case where apples might be something else.

I’ve just spent ten minutes digging around Wikipedia, online old Norse dictionaries, and following a couple of footnotes. I can now tell you that if we wanted to write a story about a quest for golden apples of immortality (à la Idun in Norse mythology), we could use the word ‘epli‘ for apple.

Without going into a minor diatribe about etymology (though, that’s another post coming soon), let’s go with the idea of ‘epli.’ 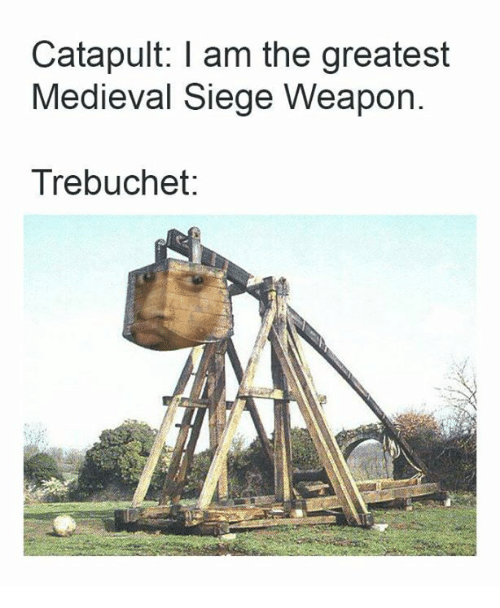 First of all, I would probably have the term ‘golden apple’ be the common usage vernacular for everyone in my faux medieval world. It wouldn’t be the first word to have a casual nickname. We do it all the time – even to this day…like the new additions to M-W of ‘googling’ and ‘facebooking.’

I might change up the actual spelling of epli for fun and to keep it from being strictly identifiable as old Norse (again, the etymology beast pokes its head up, but I tuck it back down for later). Let’s go with eppele because it keeps the general feel and sound of the original.

In my little world-building, the word eppele is a formal, sacred word, used only to refer to the ‘golden apples of immortality.’ Only nobility and religious figures would use it, and probably only on formal or nonsecular occasions. It would be the equivalent today of using ‘prithee’ in conversation. Awkward. Not done. Saved for drama or religious services. Unless you do have a habit of using ‘prithee’ in everyday life, and if so, bonus points for you! 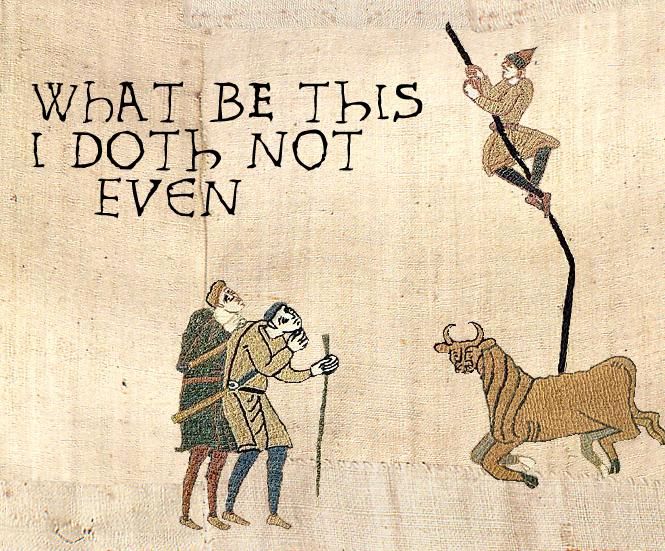 Now…let’s make things even MORE fun. Yes, this is fun. Seraphina and Sir Taylor are closing in on what they think is the end of their quest, the orchard of golden apples. Except…PLOT TWIST! When they get the apples, the apples don’t do what they’re supposed to do. No rush of immortality, no instant healing of Sir Taylor’s wound.

That’s when they meet the guardian of the orchard who reveals their mistake. By just taking the term ‘golden apples’ at face value, they’ve chased down the entirely wrong object. If they had researched the term a bit more, they might have discovered that the formal world eppele actually referred to any fruit or nut. What Seraphina and Sir Taylor are really searching for is the golden acorn of immortality in the next sacred orchard over.

How did I come up with that? Easy. In my little ten minute skimming, I read that the old Norse word epli was often used to denote any fruit or nut. 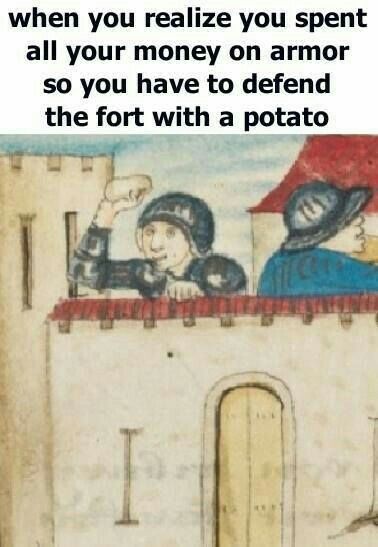 So…pulling this all back to the point I’m trying to make (yes, there is one), we can change the word for apple if it is relevant to our plot/world, but by using a solid grounding in medieval history and mythology, we not only embed details that help the reader sink deeper into our world, but we discovered a cool little plot twist.

proof i’m not a total bitch about faux medieval fantasy

I’m also here to attempt to insidiously inculcate a love of non-fiction in writers…and the public in general.

To that end, I now give you a very special Cait Reynolds Catalogue Raisonné: Ye Olde Before it was Olde.

This is a collection of general medieval history (and a little fiction) that ranges from the deliciously quick read to the super-dedicated months-long study.  Reading order and Amazon links below. 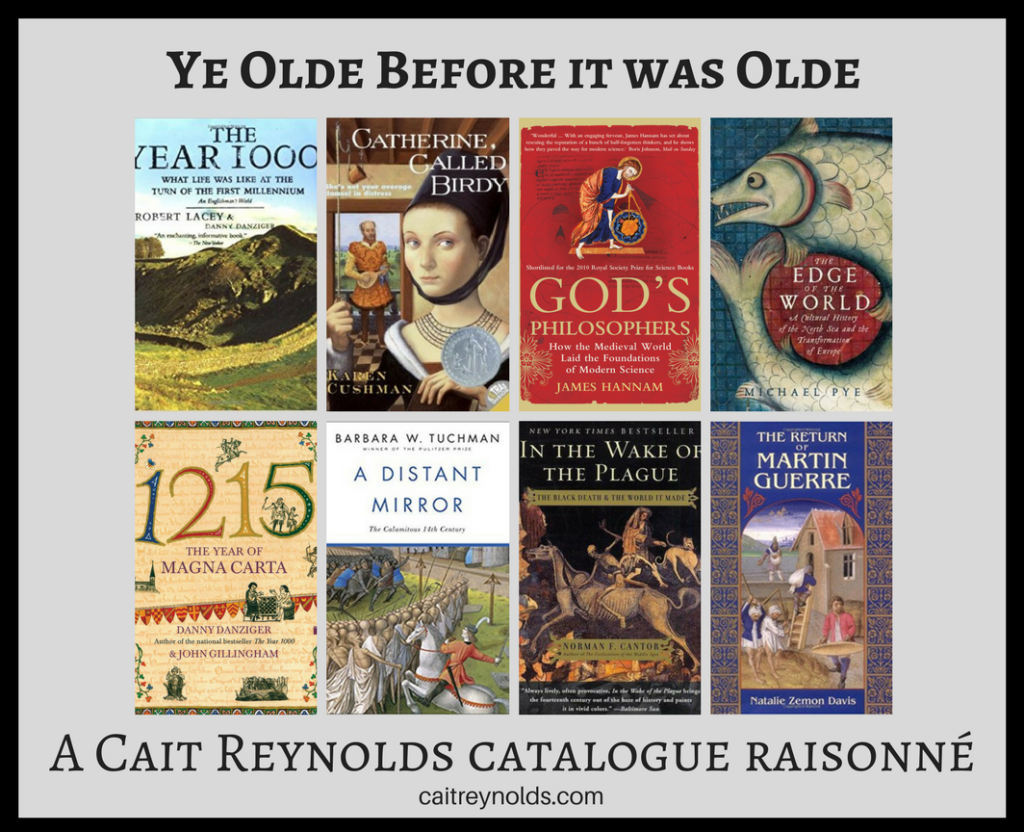 The Year 1000 by Robert Lacey and Danny Danzinger

1215: The Year of the Magna Carta by Danny Danzinger and John Gillingham

The Return of Martin Guerre by Natalie Zemon Davis

In the Wake of the Plague by Norman F. Cantor

The Edge of the World by Michael Pye

A Distant Mirror by Barbara Tuchmann

want to see what else i’m a bitch about? Check out my class this week!

FROM FIZZLE TO SIZZLE: THE SECRETS OF WRITING SUPER HOT ROMANCE ( <— CLICK TO REGISTER) 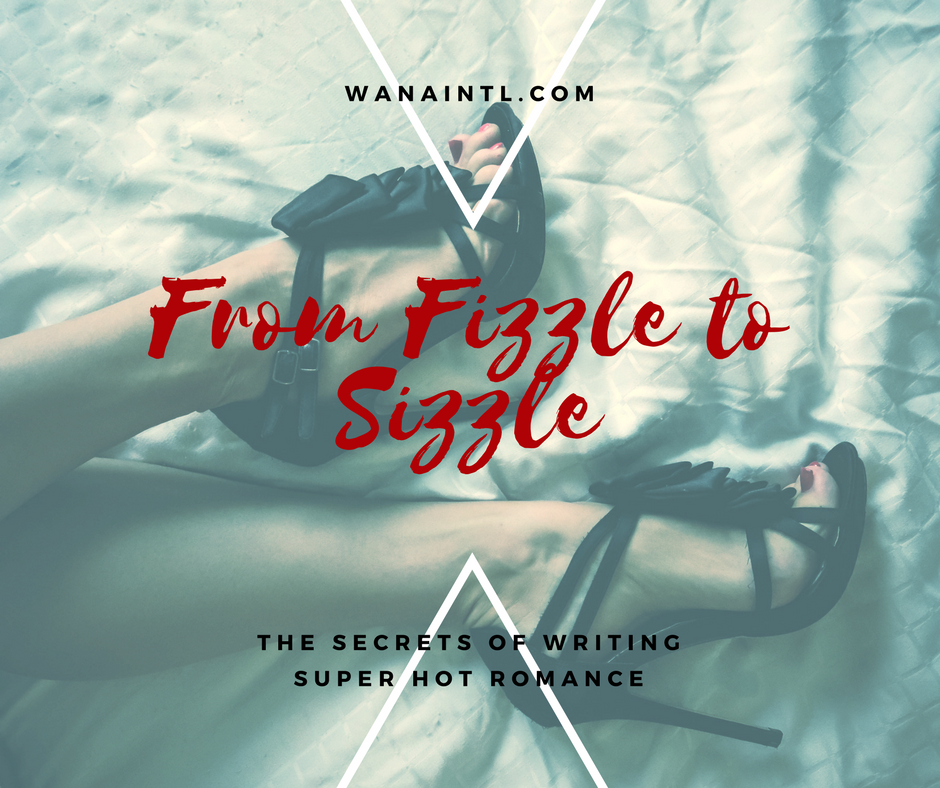 It’s not hard to notice the differences between the two types, but when it comes to articulating them, and what’s more, putting them into practice, we often find ourselves struggling against ‘Fizzle Factors’ such as trite dialogue, trope-y characters, and a plot that is so doughy, it’s mushier than the trite dialogue.

In this class, we will take apart and analyze piece-by-piece the ‘Fizzle Factors’ and then learn how to use the ‘Sizzle System’ to turn the heat allllllll the way back up!

Note: If you have taken one of my ‘How to Dominate Your Sex Scenes’ classes before, this is going to be different in that I won’t be covering specifically how to craft a sex scene. I will be talking at a bigger picture level about plot structure, character development, and fine points of the genre.

***A FREE recording is included with purchase.

Cait Reynolds is a USA Today Bestselling Author and lives in the Boston area with her husband and small, neurotic dog. She discovered her passion for writing early and has bugged her family and friends with it ever since. When she isn’t cooking, running, reading nonfiction, or enjoying the rooftop deck that brings her closer to the stars, she writes.