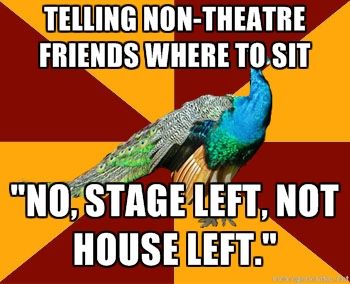 Writers get advice all the time not to listen to their Inner Editor–that snarky, perfectly manicured voice that has always has good hair and has probably never done a sniff test on a t-shirt in her life. But, there’s another voice we need to worry about: the Inner Pushy Stage Director.

Who or what is the Inner Pushy Stage Director?

It’s the fussy, sententious voice that carries a clipboard, wants you to emote more, and believes blocking is the only thing that can save the show (because God knows it won’t be the talent).

When it comes to writing, the Inner Pushy Stage Director has something to say about where every single character is, where they are going, and what they are doing (and exactly how they are doing it).

It’s not that it’s not good to know all of this. We should know where are characters are and what they are doing. The trouble comes when we decide to share all of that with the reader. The result of listening to our Inner Pushy Stage Director is writing that is clunky, over-crowded, and possibly the worst sin of all: BORING.

HOW DO YOU KNOW YOU HAVE AN INNER PUSHY STAGE DIRECTOR?

We’re writing. It’s not a complex scene. Our Hero Taylor is waiting for Sweet Seraphina to show up so he can debrief her on the morning’s miraculous escape from the Evil Band of Drug Lords/Mobsters/Human Traffickers.

There’s a knock at the door.

The way the Inner Pushy Stage Director wants to write this:

Taylor raised his head from his hands and looked up. He was too tired to startle physically from the sound. Wearily, he put his palms on his thighs and pushed up to standing, taking measured steps across the living room to the small foyer. He walked up to the door and came to a stop, squaring his shoulders against the ache in his ribs, and reaching for the doorknob. He grasped it with his hand and turned, slowly pulling the door open, watching as it revealed Seraphina standing on his threshold.

At this point, I can’t even write any more, I’m so bored. It’s all blah, blah, blah, and I’m starting to wonder when I’m going to get to the point,

If there isn’t a bit of dialogue or something interesting soon, I’m going to start picking at my nail polish…and that’s how we end up losing readers to “bookmark moments.”

Taylor heard the knock at the door but was too tired to startle at the sound. He went to the door, squaring his shoulders against the ache in his ribs and the exhaustion that dogged his steps. Seraphina stood on the threshold, looking completely unconvinced by his show of nonchalance.

Okay, now, we’re getting somewhere. It’s clear that this passage is tighter because it lacks the painful–and literal–step-by-step description of every action. But as a writer, how do we learn which actions need description and what is better left unsaid?

Fortunately, there are some simple tricks to keeping your Inner Pushy Stage Director in the wings where he belongs.

THE END POINT OF ACTIONS

Every action is made up of a series of movements. For example, to pick something up off the ground involves bending (or stooping) over, reaching out, grasping the object, and straightening up.

However, if Our Hero Taylor had dropped his phone on the ground, all I have to tell you is that, “Taylor picked up the phone.” In your mind, you have instantly pictured the entire series of physical movements that comprise the act of picking something up.

The end point of an action is the last movement (or two) that instinctively invoke an understanding of what the character has just done. We have all picked something up before. The movements are part of a common physical vocabulary we share as human beings. We just know what it means.

Therefore, we need to do is get in the habit of describing only the “end point” of an action.

In other words, we don’t need more verbs to describe a verb that already implies those verbs. Redundancy is redundant. (Sorry, couldn’t help myself).

THE MEANING OF ACTION

The Inner Pushy Stage Director is all about choreography. Everybody is moving around, doing things, providing a visual feast for the reader because ART.  He’s the kind of inner editor that believes that interpretive dance makes everything better.

In reality, there are two reasons why we describe any given action for any given character in any given scene.

Rule One: Action puts characters into situations where interactions, decisions, and reactions to events move the plot forward.

Rule Two: Action puts characters into situations where movement can either reveal or conceal something about a character’s personality, motives, emotions, and inclinations.

Rule One is pretty self-explanatory. Every time our characters decide to pick up the phone, answer the door, drive (or ride a unicorn/hover craft) over to their friend’s house, shoot/not shoot the Very Obvious Antagonist, they are taking an action that leads to more choices and chances for Very Bad Decisions.

Rule Two is a bit more subtle, but just as powerful. For example:

Taylor heard the knock at the door but was too tired to startle at the sound. He went to the door, squaring his shoulders against the ache in his ribs and the exhaustion that dogged his steps. Seraphina stood on the threshold, looking completely unconvinced by his show of nonchalance.

Our Hero Taylor’s actions “show” the reader something about his character (pig-headed stubbornness in refusing to admit he has mere human physical limitations) without having to “tell” them…which would have looked something clunky like this:

Taylor heard the knock at the door but was too tired to startle at the sound. He went to the door, determined not to let Seraphina know how tired he was. If there was anything he hated, it was showing weakness of any kind. Seraphina stood on the threshold, looking completely unconvinced by his show of nonchalance.

I have basically beat the reader over the head with “The 2×4 of Useful Information” (another blog post coming soon). As readers, we instinctively get from the first example that Our Hero Taylor is one of those guys who likes to push through utter exhaustion, doesn’t like showing weakness, is pig-headed stubborn, and is–frankly–a crap actor.

In the first example, the action is both revealing to the reader and concealing (or would be to a being of lesser perception than Sweet Seraphina) to the other character.

Whether a character is running, sleeping, standing still, or trying for the love of God to find a comfortable way to do Downward Facing Dog, movement and action are the physical manifestations of the plot.

Just as we work hard at refining dialogue and figuring out where to drop clues in the story, we need to look at how we write about how our characters move (or don’t move). Nothing drags the pace of crisp dialogue or take the shock out of a good plot twist like fussy, overly-specific descriptions of action.

Now, it’s time to plant your feet on the ground, push with your legs, stand up out of your chair, reach your arms above your head, breathing in to expand your ribs (optional nostril-flaring) as you get a good stretch before lowering your arms, rolling your shoulders, sitting down in your chair, putting your arms on the desk, and getting back to work.