I have long wanted to write about one of my greatest literary influences. Figuring out just how to do it, however, has been tricky.

I wanted to introduce everyone to E.F. Benson’s “Lucia” series, but then, part of me worried that 1920’s-1930’s English county life satire might not be everyone’s cup of tea. I might even get strange looks or *shudder* side eye.

But then, I reasoned, if anyone has read Evelyn Waugh and enjoyed his works, he or she would enjoy the less bitter but equally mordant wit of Benson in “Lucia.” Or, if anyone has read P.G. Wodehouse’s Jeeves or Blandings Castle works, they would appreciate the slightly sharper edge to Benson’s wit. 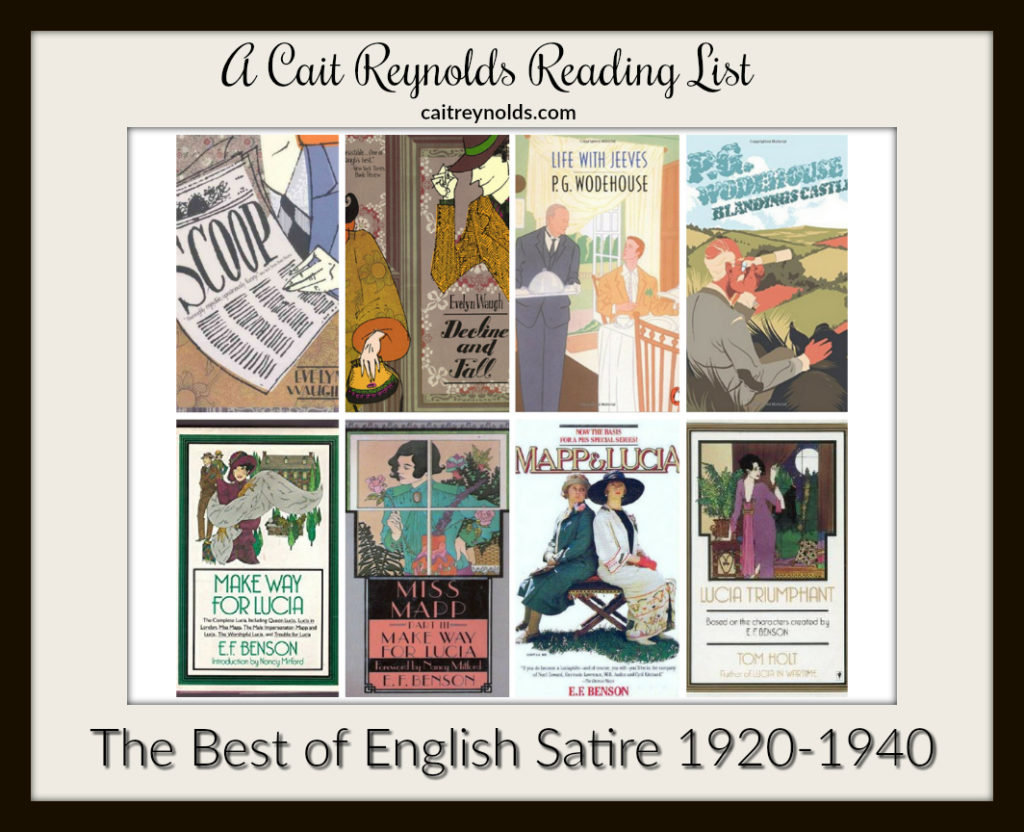 Yet, another obstacle to sharing my soul-deep devotion to these books popped up. It was a paradox worthy of Zeno (damn you, freshman year Philosophy 101 with Mr. McCarthy at Vassar!). It is that the apotheosis of Benson’s brilliance is reached with “Mapp and Lucia,” but that it is the fourth book in the series. Certainly, you can read “Mapp and Lucia” cold and appreciate it at face value, but without reading the first three books, you are left out of the sly inside jokes about Italian, the Moonlight Sonata, baby talk, and dueling.

On the other hand, if you put your hand to the plow and work through the first three books (and short story), you receive a tremendous education as a writer, in addition to the pleasure of getting the inside scoop about Lucia, Georgie, Miss Mapp, Major Benjy, Diva Plaistow (‘christened Godiva, such a handicap’), and Mrs. Wyse and her sables.

I have come to truly appreciate the process that Benson went through in evolving as a writer when he tackled the Lucia series. He had achieved a modicum of renown for his ghost stories and other gentle social comedies. He also wrote a curious work on figure skating (oh, the hidden depths of the one-term Mayor of Rye!). But, with Lucia, he decided to create a protagonist that we would absolutely detest, yet couldn’t resist rooting for.

Lucia is a pretender and a snob. She is the original mean girl who is ironically without a truly mean bone in her body. She is petty, though, and keeps score. She fibs and dominates her way to the top of the social life in the small, sleepy English village of Riseholme. No matter the mutinies the supporting cast might stage, Lucia always emerges serenely, graciously victorious, bestowing her particular brand of vindictive forgiveness on the vanquished.

At least, that is the Lucia we know and love by the end of “Mapp and Lucia.” Benson is uneven and, at times, unkind in his portrayal of her in the first two books. You almost get a sense that he was frustrated with his various attempts to sketch her just right (like Georgie and his eternal attempts to capture the Landgate in his art). He begins to hit his stride at the end of “Lucia in London,” but then, it’s as if this final burst of virtuosity wears him out, and he seeks refuge in the picturesque town of Tilling.

Tilling is based on the actual town of Rye in England. Benson lived there for many years in Lamb House, which is the basis for the famous Mallards. He even served as mayor. He was a scholar of ancient Greece and came from a family deeply immersed in the Anglican church.  There is a theory that he based the character of Lucia on a female novelist acquaintance, and he himself finds a way to vent his spleen as the delightfully, righteously malicious Miss Mapp.

Miss Mapp is to Tilling what Lucia is to Riseholme. But, with Tilling, Benson fine-tuned his supporting cast to perfection, as well as giving the reader shops and landmarks that Riseholme lacked. With the book “Miss Mapp,” we see Benson testing his blade and finding that it is just right and ready for a return to Lucia. But all of Riseholme’s dramas put together lack the ‘spleen and savagery’ of a single game of bridge in Tilling.

Therefore, Benson must move Lucia to Tilling, which he does in “Mapp and Lucia.” The results are…cosmic. The rivalry of Miss Mapp and Lucia is epic. Nelson and Napoleon come to mind, as does Rome and Carthage. The battles are bloody, and the strategies cold and steely. It is human nature at its absolutely most entertaining.

It’s also human nature at its most identifiable. Strip away the stage dressing of the 1920’s and 1930’s with their telegrams, marketing baskets, and custom of dressing for dinner, and you have a trenchant but kindly portrait of the faults, foibles, and fierceness of character. We can all identify with Lucia in the moment she is about to be found out in a little white lie or exaggeration. We can all identify with the baffled fury of Miss Mapp at a snub. We share Diva’s excitement over a new dress, or Georgie’s pleasure in the comforts of home. Their emotions are as human and timeless as our own.

There are few authors that I will read more than one book from. There are even fewer that I will re-read. I read the complete “Make Way for Lucia” series at least two or three times a year. There is always something new to discover in his magnificent, masterful manipulation of language. Every time I read these books, I gain new insights about pacing, dialogue tagging, restraint, and description. I luxuriate in his unabashedly rich use of vocabulary. I am obsessed with cracking the code to what keeps the humor fresh.

In “Lucia in London,” while the titular character is busy clawing her way to the top of the smart set in the metropolis, a clique of devotees dub themselves ‘Luciaphils’ because they find her brazen antics utterly captivating and entertaining.

Legion are those who, in the decades since the first printing, have sworn allegiance to the society of Luciaphils. There have been attempts to capture the cheeky charm and bloody wit for the small screen. Unfortunately, these have been as successful as Lucia’s attempts at a ‘morsel of Stravinski.’ Some things simply cannot be translated from the written word.

Speaking of the written word, though, the English novelist Tom Holt (another one of my favorites) managed to capture Benson’s voice and wit perfectly in two novels and a short story. It’s kind of the ultimate fan fiction, and yet, it’s more than that. It’s a true homage to a master. Therefore, I recommend after completing “Make Way for Lucia,” you should try “Lucia Triumphant,” “Lucia in Wartime,” and “The Diplomatic Incident” (in that order, despite their publication dates).

I would love to initiate more people into the wonderful world of Lucia, and Luciaphils are always welcome here for Lobster a la Riseholme and Isabelle Poppit’s red currant fool…